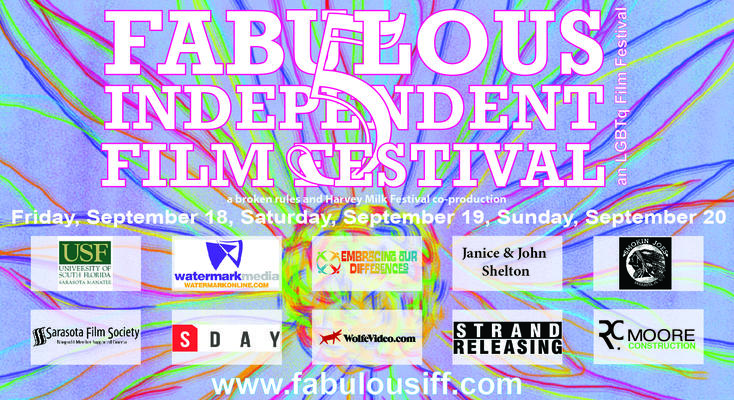 Scheduled to be held at Burns Court Cinemas in downtown Sarasota and USF Sarasota/Manatee campus, September 18, 19 and 20, the fifth annual Fabulous Independent Film Festival is continuing its tradition of celebrating diversity with 3 days of the best of LGBTq cinema.  The Fabulous IFF is a broken rules and Harvey Milk Festival co-production with all the proceeds going to HMF.  Tickets are $8.50, opening and closing night films are $10, will be available this evening on www.fabulousiff.com, https://squareup.com/market/broken-rules-productions and at Burns Court Cinemas on the days of the festival.  New this year, the centerpiece film will be a free outdoor presentation on the Sarasota/Manatee campus in the courtyard, with donation suggested.

The Fabulous Independent Film Festival six feature length films - DROWN, FOURTH MAN OUT, IN THE GRAYSCALE, LIZ IN SEPTEMBER, OUT TO WIN, TANGERINE are all eligible for the audience award.

Opening Night Film TANGERINE presented by Watermark Media, it’s Christmas Eve in Tinseltown and Sin-Dee (Kitana Kiki Rodriguez) is back on the block after being locked up for 28 days.  She and her best friend Alexandra take us on this rip-roaring odyssey through the various subcultures of Los Angeles in search of her rumored unfaithful pimp boyfriend (James Ransone).  FOURTH MAN OUT presented by USF and Stew Carrier from the BOX Office Bulls starring Evan Todd, Parker Young and Chord Overstreet is a funny, touching film following Adam, a car mechanic, coming out to his best friends on his 24th birthday.  This is a refreshingly unique take on coming out of the blue collar closet.  DROWN directed by Dean Francis known for his highly regarded “Boys Grammar,” is a superb drama exploring the forces unleashed by deep-rooted unsatisfied desires. This powerful film, not for the faint of heart, delivers strong performances.  Closing Night Film OUT TO WIN is a documentary examining the lives and careers of aspiring and professional gay and lesbian athletes from all over the world.  The locker room is one of the final frontiers for LGBT visibility in this country and OUT TO WIN celebrates the pioneers who have worked to make the world of sports a more diverse and inclusive one. Featuring interviews with Martina Navratilova, Brittney Griner and John Amaechi among others.  LIZ IN SEPTEMBER directed by Fina Torres (WOMAN ON TOP), is shot on a beautiful Caribbean beach where a tight-knit group of lesbian friends, lovers, and cordial exes meet every year to relax and let their guard down, without having to hide who they are, until Eva, a straight stranger, crashes the party.  IN THE GRAYSCALE this tenderly told tale of sexual discovery follows Bruno (Francisco Celhay) who faces challenging decisions about his identity.  This film which offers no easy answers, has earned comparisons to Andrew Haigh’s Weekend for its beautifully realized portrayal of two men in love.
Sarasota Film Society, USF Sarasota/Manatee & Stew Carrier from the Box Office Bulls, Watermark Media, Janice & John Shelton, Embracing Our Differences, Smokin’ Joes, RCMoore Construction, Sarasota Day, Through Women Eyes, WolfeVideo.com and Strand Releasing are among the Fabulous IFF sponsors making this festival a reality.  M.A.D.E. is our Opening Night Party sponsor, Ain’t No Thang food truck will be at the USF Sarasota/Manatee campus for the centerpiece presentation and will donate a percentage of their sales to the Harvey Milk Festival.  The complete list of sponsors is featured on the Fabulous IFF web site, www.fabulousiff.com.
The Fabulous Independent Film Festival
Burns Court Cinemas (506 Burns Lane, Sarasota, FL 34236)
USF Sarasota/Manatee Campus’ Courtyard (8350 N. Tamiami Trail, Sarasota, FL 34243) bring chairs and blankets.

8:15 PM  USF Sarasota/Manatee & Stew Carrier from the Box Office Bulls present FOURTH MAN OUT (USA, 86 min.) in the courtyard, bring blanket and chairs.  Selby Auditorium is the back up plan in case of inclement weather.

For press info, please contact Magida Diouri at 941.284.3059 or magida@brokenrulesproductions.com